GTD4s810 – 2009-2011
I´m employing the superficial aspect of the self as a progressive narrative, I explore the potential power and social rules connected to physical appearance. During the course of one and a half year, I developed a controlled and proper style, continuously maintaining the illusion of being a career woman 24/7. A pair of pearl earrings, a short blonde bob, a tailored blue shirt and pencil skirt became the tools for my performative research and my everyday life.
“A replica is a copy closely resembling the original concerning its shape and appearance. “ 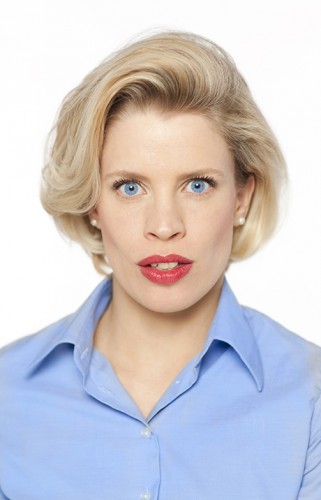 When Linnéa Sjöberg decides to transform her exterior into her version of a career woman, her pictured opposite, she starts a performative research project that will last a year and a half. Emanating from media’s images and Sjöberg’s own ideas concerning a career woman’s appearance, she gradually abandons her grunge and punk influenced style for a life in straight skirts and black jackets, a life fully confined to maintaining this role. She administers the transformation by living the images and ideas that make the role possible, but the role is not acted from a script. There is no such play, only other people’s interpretations of her actions, and the role and life embracing each other in the void of a meaningful story.

So how should we interpret the project? One of many ways could be as a sadomasochistic affirmation of how images and ideas today have such defining powers that they are mixed with and dissolve the boundaries bordering existence. Life consists of these images, no more, no less, and the point is to make this captivity into the theme of the artistic work. At the same time, the affirmation of the career woman does not end with this, but dissolves the petrification of other roles. And if one is to believe the title of the project, GTD4s810 – short for Getting Things Done for Satan –, this is exactly what it is about. By acting like a career woman, a number of relationships, meanings and images are created, which now that the performative research has come to the end have become the material for those documentations and new formations we see as the beginning of the artistry.